The next blog in our series ‘So you want to design a Wargame?’ focuses on building the map for our action around Maleme, Crete.

The first game in the Panzer Battles series (Kursk – The Southern Flank) used a custom program that expanded the previously published Panzer Campaigns map to the right scale and detail for Panzer Battles. Panzer Battles Normandy used a hybrid of this approach – a mix of auto generation and manual work. Post Normandy we have decided to hand make every map going forward - as the amount of detail having to be added after the fact, is easier to do during the initial map creation.

Building a map in Panzer Battles can be a very time consuming exercise - but also one of the most important components for any engagement. The lay of the land will more often than not determine the victor in any battle and ensuring the terrain represents the conditions the combatants actually fought in is an important consideration.

Like all things in game design, it’s necessary to research the topic at a ratio of about 3x research to 1x doing.

Our starting point is to understand what type of map is needed. There are three key features required;

For map scale, it should ideally be 1:50,000 to 1:100,000. 1:50,000 equates to 500 metres for every centimetre on the map, 1:100,000 is one kilometre per centimetre. This scale usually provides details on building distribution, points of local interest and highpoints. For height contours, the optimal scale is 20 metres, with a maximum of 25 metres. Period features are important. Many roads and towns have been built since 1945 and finding 1940’s era maps is key to reflecting the infrastructure as it existed during the war.

There are some significant map archives online ( for example http://www.lib.utexas.edu/maps/topo/

With knowledge of the kind of maps available, identifying what is required for Crete is relatively straight forward. The appropriate AMS maps are determined from the map index. Crete is ‘M701’ and ideally map sections 2, 3, 5, & 6 are required.

Unfortunately we run into our first significant issue. The appropriate 1:50,000 maps are not available for online access. There is not even confirmation that the maps are available physically. An additional search finds that a 1:250,000 map is available but the scale is too high to show the detail required in terrain such as Crete.

It’s at this point that Google comes to our rescue. Google Maps covers the globe and actually has a setting that shows the topographical levels (turn on ‘Terrain’). Fortunately these default to 20 metre contours so are perfect for creating the base map from; 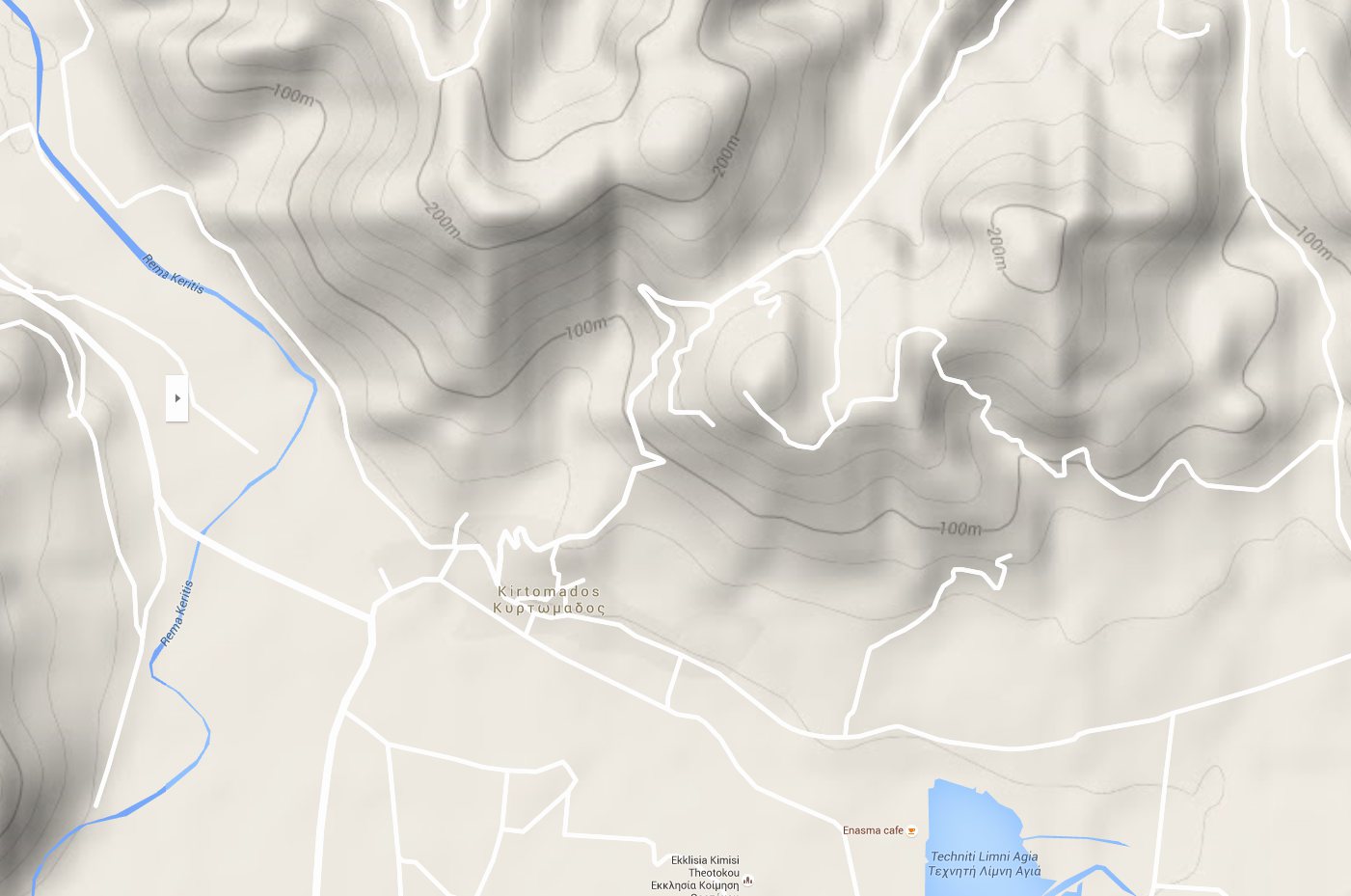 In preparation for creating our Western Crete map, 90(!!) screen dumps were taken from Google Maps and then stitched together to create a topographical master map. The area covered by the subsection above is shown in the red square below;

This source map is detailed enough for us to create our Maleme map - the only issue is that none of the man-made details such as roads and towns can be used as they reflect the current infrastructure. It is sufficient though to create all the contour and coastline details.

The next step is to resize the Google map to the right scale. There are a number of techniques for this, but essentially four hexes is equivalent to one kilometre. Once the scale is determined, the map is resized to the required dimensions.

Here is the previous Google maps section within the map builder. The map builder allows you to ‘overlay’ the resized map and then create the game map. This is a much quicker process than trying to do it by eye alone.

Here is the same section after the elevations have been completed;

And to really help the map builder there are tools such as visually showing the elevations. Each number represents a 20 metre change in elevation – aligned with our base map;

Finally, here is a zoomed out view of a larger section of map showing the variations in contours and a section of coastline. Maleme airfield is in the ‘hump’ on the far left hand side. The land mass at the top is Theodhoroi Island, just off the coast;

As mentioned previously, we need to work out which roads and towns were present in 1941. Without period AMS/GSGS maps we have to look elsewhere to get these details. The German occupying forces mapped the island extensively in 1943, but we found we couldn’t get access to these.

Fortunately Daniel Davin’s work ( http://nzetc.victoria.ac.nz/tm/scholarly/tei-WH2Cret.html ) came to our rescue again. The official New Zealand history had a number of sketch maps included that were sufficient to confirm the road network as well as the size of the various villages etc.

Here is the section of map used for the area around Maleme airfield and stretching to the east;

And here is all of Davin’s maps for the Maleme/Suda area combined to create a single overlay map. Please note, we would not normally have to do this step if we had the AMS/GSGS maps as they would have all this detail as well as the topography data;

With this additional detail map resized and aligned with the base Google map, it is then loaded as an overlay map into the map editor;

The editor is powerful as it will allow you to see some features such as roads, rivers/streams and place names on the actual overlay view. Below you can see how these features in game look against the source map;

And here is the completed map with all the towns, rivers and roads included (click for full size);

Note the addition of beach, brush, orchards, fields and broken on the previous image. The beach detail was determined by looking at the satellite images from Google maps as well as the aerial photographs available from 1941. Most bridges were rated as only medium rather than high as none could carry any more than 7 tons at a time.

Other features were described but not necessarily captured on maps. For example orchards (olive groves) and vineyards were setup near villages. Vineyards were almost always on slopes. Brush represented low bushes that provided concealment but rarely blocked visibility like forest did.

Below is a contemporary photo from Hill 107 above Maleme airfield looking east towards Theodhoroi Island and Canea beyond. You can see the significant ground coverage for concealment but also how unrestricted the view is;

It’s also interesting to note how the mountains to the south really are a divider down the middle of Crete and that the bulk of habitation is in the north.

On our map, rough was included pretty liberally as was stone walls. The terrain was generally pretty broken and the ground state as well as the range of vegetation made it very hard for an airborne assault and significantly easier for the defender. The below photo is a good example of the kind of terrain fought over;

Here is a great example of how the vegetation provided concealment;

And finally another example of walls and other features that provided natural defensive points. Again note how visibility and cover work together;

Finally, here are some selected shots of our completed maps (all can be clicked for full size). We believe it’s a reasonable approximation of the terrain and cover evident in 1941.

Prison Valley with the soon to be impregnable prison;

Canea and the nearby 7th Field Hospital;

Galatas and the various hills named by the New Zealanders;

Suda and 42nd Street – soon to be the scene of a bloody engagement between Maori and Gebirgsjaeger;

We hope this (long) post gives you an idea of exactly how much work goes into a map. The final Maleme/Suda map tallied up to nearly 28,000 hexes – most of which will be used in various scenarios.

Our next blog post will move onto in-game graphics and creation.